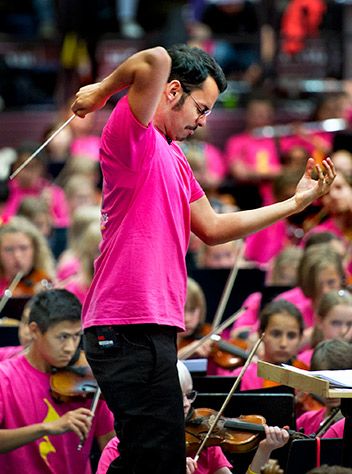 “Ron Davis Alvarez is a man

Selected, in 2017, as one of the world's 50 best teachers by the Varkey Foundation, as part of the Global Teacher Prize, known as the Nobel Prize for teaching, Venezuelan Ron Davis Alvarez is specialized in training teachers for children and youth orchestras. He has lectured conferences, master classes and workshops with an emphasis on musical language, rhythm and harmony, with teachers from Venezuela, Colombia, Ecuador, Chile, Mexico, United States, Greenland, United Kingdom, Denmark, Italy, Germany, France, Croatia, Sweden, Finland, Cyprus, Turkey, Jordan, Lebanon, Kenya, South Korea, China and Greece, where he has taught in the Skaramagas refugee camp.

In 2016, Ron Davis Alvarez created in Gothenburg, Sweden, the Dream Orchestra with children and teens aged between 8 and 19 years, refugees from the violence in Syria, Afghanistan, Iraq, Iran, Palestine, Kurdistan, Albania, Angola, Eritrea and Somalia. The objective has been to integrate them into Swedish society. This group, which already has more than 60 members, is also distinguished because its musicians have never played an instrument before.

Product of the renowned Venezuelan musical and social program, known as El Sistema, Alvarez was formed Venezuela as a violinist, orchestra conductor, teacher and cultural manager. He founded in 2011 an orchestra located 700 kilometers away from the Arctic Circle at the Uummannaq Children's House, in Greenland, run by Ann Andreasen. This is the first orchestra of Inuit children in El Sistema, where Alvarez worked for three years with children and teens who have traumas.